Regulatory and helper T-cell subsets in health and disease 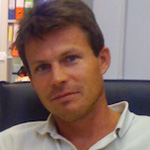 CD4+ T-cells are central players of adaptive immune responses, because they co-ordinate the activity of several other immune cells such as dendritic cells (DC), B cells and cytotoxic CD8+T-cells. CD4+T-cells can be subdivided into two broad subsets of helper and regulatory cells, which promote and suppress immune responses, respectively. Both regulatory and helper T-cells can produce Interleukin-10 (IL-10), which is a potent anti-inflammatory cytokine but also promotes cytotoxic T-cell responses and B-cell antibody production. Consequently, IL-10 has a dual role in autoimmunity and cancer: On the one hand, it is required to maintain intestinal immune homeostasis and to prevent colitis, but on the other hand it could promote the generation of pathogenic autoantibodies in systemic lupus erythematosus (SLE). Also in cancer IL-10 might have a dual role.
Regulatory T-cells can be sub-divided into the well-defined CD25+Tregs, which express the lineage-defining transcription factor FOXP3, and Tr1-cells, which produce high levels of IL-10. It is debated whether Tr1-cells represent an independent differentiation lineage or only a transient and unstable activation stage. We identified a population of cytotoxic Tr1-like cells that express the lineage-defining transcription factor Eomesodermin. These Tr1-cells, but not FOXP3+Tregs, were functionally impaired in systemic lupus erythematosus and in inflammatory bowel diseases, suggesting a key role in these diseases. Their role in cancer is under current investigation.
The function of helper T-cell derived IL-10 is poorly understood. We identified a population of auto-reactive CCR6+ memory T-cells, which have a context-dependent helper/regulatory function: IL-10 produced by these CCR6+ T-cells inhibited auto-reactive T-cell proliferation induced by immature DC, but also promoted IgG production from naive B-cells. IL-10 producing CCR6+ T-cells are distinct from other known T-cell subsets, and promoted autoantibody production in SLE, suggesting that they play a pathogenic role. Finally, auto-reactive CCR6+T-cells producing pro-inflammatory cytokines like IFN-g and GM-CSF, but not IL-10, are enriched together with virus-specific Th1-cells in the cerebrospinal fluid of multiple sclerosis patients following attacks, suggesting that these two T-cell subsets promote respectively relapses and anti-viral immune surveillance in the central nervous system.